As with most Christian practices, it’s one thing to talk about a topic theoretically–particularly one as polarizing as the “sign gifts”–and another thing to practice intentionally. Indeed, I was privileged and greatly encouraged to be an active observer–and limited participant in–the following story. A story that, I was specifically assured, was of no more particular specialness than any other day walking with God:

—————-
The dream was so clear, or at least it seemed to be. “Go to Dallas,” the dream said. She also recognized the pastor in it. A Texan pastor, earnestly preaching to an equally earnest audience–an audience which included yet another well-respected pastor. In the dream, she eagerly tried to gain the listening pastor’s attention, but he was zoned in, intent and concerned about what the speaker would have to say. He ignored her.

It was December 2016. An opportunity as a missionary–a longtime desire–had seemingly just been closed. What was next? Having heard from God through dreams before, she took a week’s vacation to Dallas, during which she visited the pastor’s church. She also spent some time doing local outreach with an organized group, making another contact who communicated the great need for workers in Central America. They exchanged numbers. The week in Texas came and went. She returned home and went back to work.

Months passed. She was invited to a conference that she didn’t know a lot about. She agreed to go, trusting the invitee would not steer her wrong. She noted the conference speakers: Sam Storms, Matt Chandler, Francis Chan, Andrew Wilson, Jack Deere. She had never heard of two of them. It was no matter; seeing the conference topics and already convinced of the validity of the sign spiritual gifts for today, she was interested in coming, particularly to get an understanding of what the term “Reformed charismatic” could possibly mean.

The week of the conference arrived. She received an unexpected call back from the contact she met in Texas: would she be interested in coming to serve women–women specifically? It wasn’t quite what she expected–not feeling gifted in that way–but she was ready to obey. Tentatively committing in her mind, she prayed that God would provide a sign to validate that this is what He would have her to do.

I met her–my sister–in the parking lot of a St. Louis Walmart, the spot we had determined to be the best midway point for the both of us. We combined bags and continued our shared eight hour journey. Setting a course for Oklahoma City, we arrived at the airbnb late that night.

In the morning we drove over to the conference site. A long line of people waiting to get in made it clear that there were a lot of likeminded people interested in the theme of the Conference, namely to “challenge followers of Jesus to eagerly embrace both the functional authority of God’s Word and the full range of miraculous gifts of the Spirit, all to the glory of God in Christ.” What appeared to be several thousand people filled the venue. Worship began and it was immediately evident that most everyone was there for one purpose: to worship our Lord and Savior, eager to learn and see what God was wanting to do today. The messages were arresting, book-ended by a prophetic ministry team gifted in, well, prophecy. I will not share certain details here–which were inspiring to witness–but this team brought several powerful words of encouragement and healing to those who were in attendance.

Fast-forward ahead to the evening. The third speaker of the first day of the conference takes the stage: Matt Chandler, Village Church lead pastor, whose podcasts have been a tremendous source of encouragement over the past two years. I won’t rob the impact of the message by trying to share any of it here. I’ll just say that you need to watch it. Like the others already shared that day, it is a clear, honest, compelling message. The room is riveted. We’re up in the balcony, so we can see everything. It’s a powerful moment.

Out of the corner of my eye my sister moves to take a picture of the stage. I think nothing of it.

After the message, the entire room is fired up, eager to see what God is about to do. Those gifted in prophetic ministry come back to the front and continue where they left off: praying for the sick, giving encouragement, and sharing things that God has revealed to them about people in the room for the purpose of praying for them. I was somewhat prepared by having listened to several Bridgeway Church messages by Sam Storms on the prophetic gifts, but other than that I’ve never seen anything like this. It’s done very orderly, winsomely, yet with a supernatural power that is immediately obvious.

I’m just sitting up there on the balcony watching everything. I look over at my sister–who isn’t fazed in the least. She smiles, then stops.

“Have I ever told you about my dream?” She asks me.

She replies, “My dream, the dream I had after praying for direction from God last year. I just saw it happen. I just took a picture of it.” 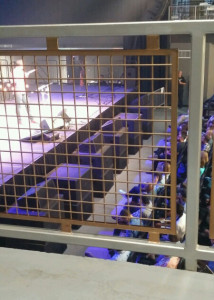 She explains the dream that she had 10 months ago, months before being aware of any sort of conference that she might be attending. The dream with Francis Chan sitting in the audience watching Matt Chandler intently. (A dream about which she wrote in her prayer journal with the following words: “We need the Word! We need direction! We need a strategy for this!”)

“That’s really cool,” is all I can manage.

I’m not used to this.

The conference continues the next morning. The time in between sessions quickly become some of my favorite moments, having a few minutes to meet like minded people and share stories. I engage the guy next to me. We agree that the previous night was incredibly powerful, and that Matt’s message (can I be that familiar if I’ve never met him?) was particularly inspiring. He mentions offhandedly that he is a regular attendee of the Village Church.

“That’s cool, I’m a big fan of the Village Church’s podcasts,” I say. Who isn’t, really?

He smiles. “Hey, when will your wife be back?”

He eyes my ring apologetically: “Great, I have a word for her,” he says. (“a word” meaning a message that God impressed on him to share with her)

We both turn toward the stage, conversation at a natural lull. I’m intrigued to see how a prophetic word, just like everything that had happened the previous night, could now directly affect someone in my family.

I can hardly wait to find out what is about to happen. I see my sister coming back to her seat, and then introduce the two. They begin talking, but as they’re talking the next session starts.

I have to wait for forty-five minutes to find out how it went.

The session ends. As the cacophony of stadium seats rattle while everyone stands to leave, she asks me, “Do you want to know?”

She paused. Reflecting a moment on how good her God is, to give her, His child, a direct word of encouragement in specifically addressing her concerns.

Three years ago, my default reaction to a story like this would have been cynicism or skepticism. Or, to be kinder to myself, perhaps I would have believed it–because God can do anything, of course–but in an “out there, only other people experience those things” kind of way. I thank God that He’s helped me come a long way since then. After seeing God’s supernatural–but yet very natural–works described first-hand through many people around me, I have had layers of skepticism fall away. I have had to chip away my self-preserving shield that was set up to protect my reputation, a shield behind which I could sardonically criticize and critique. A shield which kept me away from anything remotely uncomfortable or “weird.” A shield behind which I never had a need to step out or pray in faith.

As I reflected on all this, I had this thought. It’s a fairly obvious thought, and a simple one.

Without an understanding, expectation, or trust of the 1 Corinthians “supernatural gifts”; the trip to Dallas, the meeting of ministry contacts, and finally, the confirmation interaction would not have happened. And what was so encouraging about it all was, in practice, how natural the supernatural gifts worked. That gift here, described in 1 Corinthians 12:8, and which is often known charismatically as “word of knowledge”; it was just as normal as an everyday conversation.

Indeed, when done properly and in order, subject to Scripture, these supernatural gifts from God are such a blessing, as was demonstrated at the Convergence Conference. Blessings that continually remind us, certainly of God’s preeminence, but particularly His imminence. They bring apologetic, evangelistic, and life-changing power.

“We’re entering into a season yet again of Christian history where content will not carry the day. We’ll need power.” – Matt Chandler