For fifteen years, Switchfoot has been my answer to “your favorite band” in those password reset questions. I’ve had a long history following and listening to Switchfoot. I’ve been to probably six or seven of their concerts, including a fortuitously timed business trip to San Diego that coincided with Switchfoot’s annual Bro-Am concert on a Californian beach. 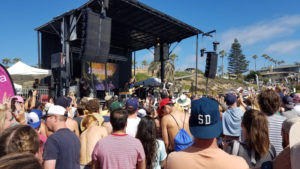 One of the benefits of business trips in San Diego

I initially started this post in 2016, back when Switchfoot released their tenth full-length album, Where the Light Shines Through. I planned to make this a “top ten” list to mark that occasion, but they’ve since released another, Native Tongue, so we’ll add that to the list too!

The late 90’s and early 00’s were a strange time for what was labeled as “Christian music.” A whole flood of bands were releasing music under the label “Christian,” which sometimes felt more like punk rock with generally innocent themes and without cursing. I remember going to the Christian bookstore and using the stretched out community headphones to listen to these demo cds. As a teenager, I didn’t listen to much Switchfoot, instead opting for the faster tempo’ed punk rock.

in 2003, Switchfoot disassociated from the bookstore “Christian” label with their release of the Beautiful Letdown, bringing (undeserved) criticism from the Christian community. I remember the pastor at our church specifically calling out in a sermon about how terrible it was that a popular Christian band would intentionally shed their Christian label. Now, looking back, Switchfoot absolutely made the best of their new categorization of making “music by Christians” instead of “Christian music.” Jon Foreman, Switchfoot’s lead singer, has some helpful thoughts on the subject.

Lyrically, Switchfoot has never shied away from portraying honest struggle or challenging the Christian status quo. Songs like “the Shadow Proves the Sunshine” would never make it on a Christian worship album, but are absolutely essential in portraying an honest Christian experience. Songs like “the Sound (John M. Perkins’ Blues)” have Switchfoot trying to wake listeners up to someone else’s perspective on racial undertones that exist in the United States. They wrote “the Sound” in 2009.

Switchfoot often ties everything together with direct or indirect references to the good news of the Gospel. The music is fantastic, sometimes gritty, sometimes uplifting, sometimes melancholy, sometimes experimental, but always substantial. With eleven full-length studio albums to choose from, a Switchfoot concert is sure to disappoint just as much as enthrall due to all the songs they “could have” played.

So anyway, on to the list. I’d like to list their eleven studio albums in the order that I would introduce them to someone. I guess you could call those my favorites, but I’d like to stress that all of their albums are in various stages of “good” to “great” to “amazing.” Ignoring the bottom of this list would have you miss some great songs.

Just getting started but with still with some great tunes right off the bat. Full disclosure: I only recently listened through this album. I was a little young when this came out.

Standout tracks: Home; Chem 6A; You

“Native Tongue” and “Dig New Streams” are fantastic tracks. “Voices” could have been great, so allow me a brief digression here. “Voices” almost single-handedly derailed my enjoyment of this album. I’m sure they didn’t mean to do this, but the chorus of the song makes it feel like the song’s focus is a celebration of the wrong thing, with the verses and the bridge taking second stage. It feels like the song is celebrating the symptoms rather than the cure or the hope. (In the music video, the “voices” are telling Switchfoot that they are irrelevant, but it is very easy to extend this meaning to other things). “Take My Fire” seems to walk this sentiment back, with the lyrics showing an active resistance of the enemy. But that happens six tracks later. It’s an unusual message for such a heavily promoted song for the record.

Their first studio recording of “Dare You to Move” landed on this record, to be re-mastered three years later. One of my first introductions to Switchfoot was a music video which was on a Wow something or other DVD. “Love is the Movement” has found its way into several recent Switchfoot sets, including the 2020 Bro-Am streaming event.

Standouts: Dare You to Move; Learning to Breathe; Love is the Movement; Innocence Again

The backdrop to the “Fading West” surfing documentary, this album brings in more synth work than anything else they had released to that point. The surfing vibe is strong, as this really feels like a summer album. This is one of my wife’s favorite Switchfoot albums.

Standouts: When We Come Alive; Say It Like You Mean It; BA55; Back To The Beginning Again

With their second studio album having two tracks directly influenced by St. Augustine and Soren Kiergegard, you know that this isn’t your typical rock band. I could be convinced that this should be even higher on the list. It’s remarkable how great this sophomore album is.

Standouts: New Way to be Human; Sooner or Later; Company Car; Something More; Only Hope

I see this album as the wildcard of the bunch, typified by the title track’s keyboard slams. The moods bounce around: “Dirty Second Hands” with its hard rocking rhythms and thematic precursor to Foreman’s “Before Our Time”, “Awakening” as a fun four on the floor anthem with a soaring chorus, “Amateur Lovers” with its mish-mash of instrumentation.

It’s easy to see why this one won a Grammy. As with several others of the albums on the list, I could add 75% of the tracks as Standouts.

Standouts: Your Love is a Song; the Sound; Enough to Let me Go; Free; Hello Hurricane; Always

Their grittiest album, several tracks feel like David’s psalms in their honesty, as in “The Shadow Proves the Sunshine.” “The Blues” is reminiscent of the sage’s musings in Ecclesiastes. The album might feel more melancholy than their previous four, but lines such as “Let the weak say I am strong, and it won’t be long,” from “the Setting Sun” remind us that there is still an eye on the ultimate redemption of this broken world. Stylistically, these album is a treat to listen to.

Standouts: Lonely Nation; The Blues; the Setting Sun; the Fatal Wound; We Are One Tonight

Album number 10. is it everything I had hoped? Yes, mostly. For one, it brought one of my top 3 switchfoot songs of all time (“If the House Burns Down Tonight”). I’m a sucker for songs with interesting time signatures, as in “Float'”s 7/4. One thing that Switchfoot has always been in tune with how to deal with struggles from a bigger perspective, as in “Where the Light Shines Through.” The full line being “The wound is where the light shines through.” As has become their standard, they wrap up the record with the uplifting “Hope is the Anthem.”

Standouts: Where the Light Shines Through; If the House Burns Down Tonight; The Day I Found God; Bull in a China Shop; Hope is the Anthem

“Meant to Live” and “Dare You to Move” were the ones that brought most of the acclaim, but the other worthy singles are numerous: “This is Your Life”, “The Beautiful Letdown”, “Gone”, “On Fire”, “Twenty-Four”. There’s no filler material here.

The lyrics “We were meant to live for something more” in the track “Meant to Live” is fromthe track that most remember from Switchfoot. This theme would quickly become a part of nearly every Switchfoot record to follow.

Standouts: all of the above

Two themes run strongly in this album: making the most of living this life, and looking forward to our ultimate home.

“Restless” and “Where I Belong” are simply amazing tracks. “Dark Horses” is the main rock out track on the record and an instant concert classic.

“Restless” is basically an entire song that fleshes out Augustine’s timeless quote, “My heart is restless until it finds its rest in you.” The yearning to finally meet God in heaven at the “sea of glass,” looking for the “final healing,” and “waiting, anticipating, all that I aim for, what I was made for” is simply inspiring. The music carries the message perfectly.

Speaking of inspiring, “Where I Belong” ends the album in rousing fashion: “On the final day I die I, I want to hold my head up high, I want to tell you that I tried, To live it like a song.” All while “looking for a home, In a world where I belong.” I never would have guessed that you could make such a track using only two chords.